The Kankakee Police Department has an authorized strength of 74. Currently, the department stands at a strength of 70 sworn officers. Of those, 43 operate in the patrol division; 12 in investigations; 8 in KMEG (Kankakee Area Metropolitan Enforcement Group), 2 in juvenile; and one in stolen auto. In addition, the Kankakee Police employ ten civilian employees. These jobs include records, technology, and community service. The department’s annual budget in 2012 was $8,929,704.

After receiving a charter from the Illinois General Assembly, the first election was held in Kankakee City on Tuesday, April 10, 1855. George Kerns was elected to the office of Constable and Collector becoming the first Kankakee City law enforcement officer. In 1865, under a special charter, the mayor-council form of government. The City Marshall was one of the City Officers elected each year in the City Election. The Mayor appointed the members of the police department. 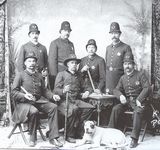 In the years between 1892 to the present day, there have been 23 Chiefs of Police and two acting Chiefs. The only Chief to retire on pension was Wallace L. Flannery who retired in 1961 after 22 years of service.

On Tuesday, September 4, 1928, a special election was held. The citizens of Kankakee voted in civil service, for Policeman and Fireman, by 430 votes. Following the election, Mayor Louis E. Beckman appointed Fred Geisking, Fred Roach, and Harry Topping to the Civil Service Commission. The first meeting of the Civil Service Commission was held on Monday, October 8, 1928. Fred Geisking was elected chairman and City Clerk Harry C. Thompson was elected Secretary.